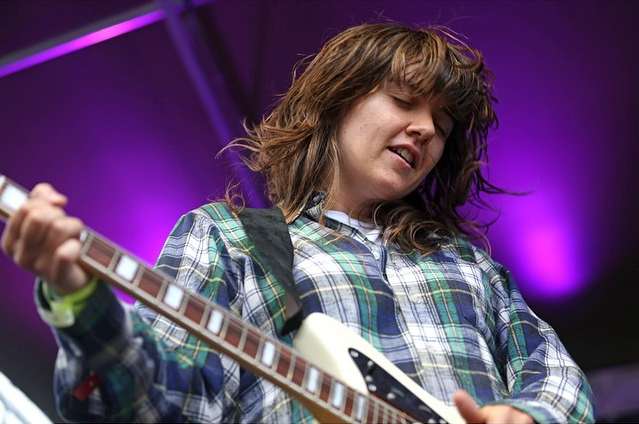 Courtney Barnett might be the coolest person in the world !

I’ve been obsessed with her for months but I saw her live last night and, man, did she blow me away ! You know how rare that is ? When something you thought was going to be great turns out to be better than that ?

But before I gush some more I wanted to give you a taste, I just searched the net to find some short video that could help and this isn’t perfect but it’s a good start, it’s from a couple months ago at a festival in Melbourne, her hometown.

The thing about Courtney is that she’s an intricate lyricist, she tells those funny trivial stories that feel like they carry some deeper meaning. But she sings them with this off-beat irony that either proves she’s not sure what that meaning is or that she’s already wise enough to now meaning is overrated. It’s like you can hear her laughing at herself in her songs. I find that so intriguing and engrossing, probably because she’s doing what I’d like to do. She found a way to express her inner torment while making fun of it. Anyway, going in I knew I loved the song and that the music was fun and all I wanted to see was the glint in her eye. That was my one expectation. I wanted to see wit !

What I got was a whole different experience. I underestimated how organic her music was. Her guitar feels like an extension of herself. She didn’t seem to be playing it so much as they were playing together. To be fair, I do not understand the first thing about guitars and guitar playing. That was always the most mysterious part of rock for me. But to me live music like all other performance arts needs one thing to be great : effortlessness !

CB3, Courtney’s live band is only made of her awesome laid back drummer Dave Mudie, her equally cool but more chatty bassist Bones Sloane and herself and her two guitars. It seems like such a stripped-down formation to me and yet their presence and sound felt so massive. They seemed to be channelling a mix of my fondest memories of 90’s rock and some fantasy of surfer music with a boldness that made it all self-evident, unquestionable. Which, if you think about it, might just be the definition of cool. I’m using those references to describe what it felt like, but don’t think for a second I’m calling her derivative. She may remind you of many but she’s still Courtney, and the world is only now starting to fall in love with her.

Don’t get me wrong though, the wit was there too but it wasn’t her go-to move. Bones got more jokes in than she did. For someone who seems so brainy on the page, she’s everything but when she plays. Knowing what she was singing about just gave me an added layer of pleasure, like a private joke. When she announced her next song was Depreston I couldn’t resist leaning over to our friends and whisper « It’s a song about real estate » and see the puzzled look on their faces.

Because I do love her lyrics, and that she makes a house hunting trip feel like an mystical journey (you should really listen to that song it’s great). I’ve been listening to everything she recorded for weeks and her words have sipped into my brain, bits and pieces showing back up at random moments. But the beautiful thing was that even though I knew all of the songs last night none felt the same. She gave them something else on stage and that drum changed the sound of her music.

So here’s my recommendation dear friend, if Courtney shows up in your town don’t miss her. But the truth is that last night was the last show of her tour and she’s flying back to Australia. So in the meantime I’ve made you a playlist of my favorite tracks :

Her music will feel comfortable and easy but it will leave you more inquisitive and free-spirited that you were before. It sounds like a paradox, I know…

And one last thing, she had a singer from the label she started opening the show. A funny guy who makes you think of a younger much more relaxed Dylan… He charmed the crowd chatting about Kebab and how cold England was. Here’s what he sounds like (and looks like)

His album is coming out soon, I’m pretty sure it will be worth a listen. I’ll get back to you on that.

Anyway I gotta leave planet Courtney now, but let me know how you like her… What I think I’ll take away from that night is that a glint in the eye, a guitar, a bass and drums might be all you need…

Here is the full NPR SXSW concert : 37 minutes of pleasure.

To illustrate how fantastic she’s at the quiet stuff :

A cover she sang last night as an encore

But to me she’s now a guitar Goddess :

A cool song from her Double EP